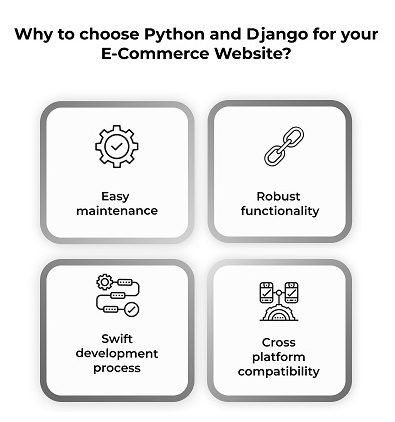 Python and Django have transformed the way how eCommerce websites work!

But how these technologies are paving the for a better future for eCommerce websites ahead? Let’s explore!

Well, in today’s competitive digital world and fast-paced society, consumers don’t usually prefer to go out on the streets to do shopping. Instead, they prefer buying most things online for their convenience which makes having an e-commerce website exclusively important.

There is no doubt that eCommerce websites have become the need of the hour and help consumers live a hassle-free life. From online shopping to convenient item deliveries, easy transactions, and more, eCommerce websites give people a plethora of options to choose from.

But, how can you build a successful eCommerce website by using Python and Django?

Well, we’re sure you might have asked yourself the same question: “Why choose python and Django for the eCommerce website of your business?”

If you are looking to build an eCommerce site with python and Django, then hiring a good web design company in San Diego will be a good starting point.

What are Python and Django?

Python is a great language for web development, which is why it’s even more popular for eCommerce projects. Python’s robust and easy-to-use libraries, along with its simplicity make it perfect for developing eCommerce websites. Python is a high-level, general-purpose programming language that is often used for system administration tasks, software development, and web application development. It’s considered to be one of the most popular languages available today, mostly because it’s simple to understand and straightforward to use. This makes it ideal for beginners who are still learning how to learn Python.

Whereas, Django is a modern, high-level Python Web framework that encourages rapid development and clean, pragmatic design. It’s also one of many great frameworks for eCommerce applications, including Magento and Shopify.

But, what about you as a business owner? Here’s why you should choose Python and Django for your next eCommerce project-

Python and Django are easy to maintain, learn, and modify. The code can be read easily without any hindrance or problems. This, in turn, helps in modifying the eCommerce site whenever and however you want for your business. Additionally, it makes the troubleshooting process simpler, allowing developers to focus on more important tasks.

Your e-commerce website building process will be rapid, thanks to Python and Django’s effectiveness. A plethora of frameworks, modules, and tools are also part of the languages to support the development process. As pre-built functions shorten the coding time and let you use built-in functions, you might even reuse Python code from past work.

Using Python and Django for your eCommerce project also has the major benefit of allowing any Python developer to continue where their team left off with the code. Therefore, Python and Django are one of the best options when it comes to building an eCommerce website quickly. However, this is only possible if you’ll hire an experienced web design company in San Diego.

In addition to being easy to read, Python and Django work with a variety of operating systems. They are a great option for a wide range of development projects as a result, whether they are for Windows, Linux, Mac, or many other computer systems.

Python’s cross-platform flexibility is one of the main reasons it is seen as a great option for companies wishing to construct an e-commerce website. The greatest options for creating a full e-commerce website with a variety of features are without a doubt Python and Django.

If you’re managing a retail store, that means a huge amount of data must be processed every day for hassle-free business management. Python and Django are one of the few programming languages that can help you in transferring this data smoothly and effectively. Python’s latest features and a broad library make building a comprehensive and functional marketplace relatively straightforward for developers. Python and Django not only perform brilliantly in your business activities, but they also save your developers time creating intricate and lengthy code.

Even if this is only a summary of how Python and Django might help you by developing a feature-rich e-commerce website for your business, it may appear to be a lot of work. Not to worry, hiring an experienced web design company in San Diego could help you in developing a robust website by using one of the most popular programming languages- Python and Django. This will not only help your business grow at a faster pace but will also streamline the process to a whole new level.